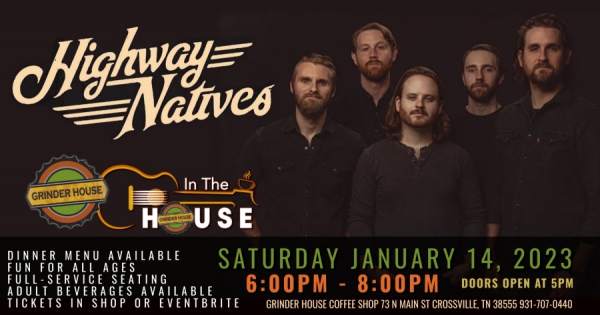 Highway Natives is an American rock 5-piece out of Nashville, TN. With "a retro ‘70s vibe combined with roots-flavored country-rock brawn, Highway Natives conjures up early Allman Brothers, The Black Crowes, and savors of the fictional band Stillwater in Almost Famous," (Medium). Having such a wide array of eclectic influences, at their core, the group can best be distinguished by their rich, soulful harmonies, artful full-bodied stylings on guitar, and a rhythm section that’s groovy timekeeping is nestled tightly underneath singable and raw lyrics that trade between the two lead singers.

Made up of Brandon Moore, Jordan Miller, Matt Drummey, Artie Scarazzo, and Arthur Stover, Highway Natives was originally formed as a duo in mid-2019 when Moore and Miller recognized their songwriting compatibility, and created together as an escape from the rigorous and hectic music business where they worked behind-the-scenes at a record label and a recording studio. After recording demos with large, full band productions, they realized what they really longed for was a sonically larger live sound, as well as a collective group to share the vision with. With a careful selection, Drummey, Scarazzo, and Stover were brought on and the group quickly solidified and started hitting the road together.

In May of 2021, the group released their first project, a self-titled EP; 4 carefully selected songs from a catalog of songs they were already playing live. Highway Natives debut EP went on to receive acclaim from publications such as American Songwriter and Medium, and took them to stages all over the southeastern region of the USA.

Following their EP, some members of the group went through personal, life-changing events, on top of being in the midst of a global pandemic. As serious changes and adaptations were happening in their personal lives, the Natives lifted each other through writing and creating music as a remedy. The time spent together in this period of their career resulted in the making of their first full length LP, “West of the Blindside,” out now.