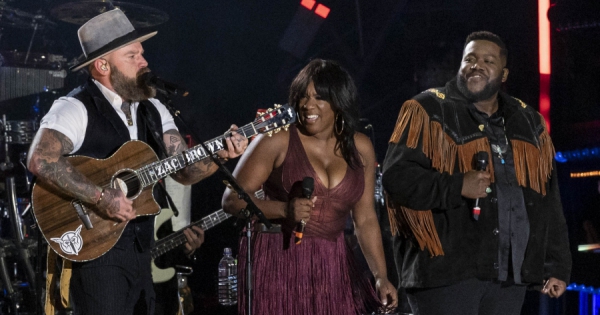 Ringing in 2023 with Nashville's Big Bash

Nashville, Tennessee hosted one of the largest events in the country to close out the year with the 14th annual "Nashville's Big Bash" hosted at Bicentennial Park.  Metro Nashville Police estimated approximately 210,000 at this year's event surpassing the 200,000 record set in 2019. The New Year’s Eve Live: Nashville's Big Bash was aired 7p.m. to 9 p.m. and 9:30 p.m. to 12:30 a.m. central time on the CBS Television Network, and was available to stream live and on demand on Paramount+.  The five hour celebration featured almost 50 performances from multiple locations including Nashville's Bicentennial Capitol Mall State Park.

For over three decades, Brooks and Dunn has been well known in Nashville for their numerous hits including "My Maria," "Boot Scootin' Boogie" to name a few.

Recently declared in 2021 as the three most played female artist on country radio and CMT artists of the year, Kelsea Ballerini has constantly delivered hit after hit songs backed by many awards and recognition that has innovated country music.

Holding the record for most consecutive sold out shows at Fenway Park, Southern rock group Zac Brown Band is no stranger to Billboard charts with over six of their albums reaching the top 10 of the Billboard 200.

In addition to the Nashville performances, the CBS broadcast also featured performances from other locations including Little Big Town.

Nashville rang in the new year at midnight with the tradition of the music note drop followed by fireworks.  Be sure to follow the Visit Music City official website and social media for future events: