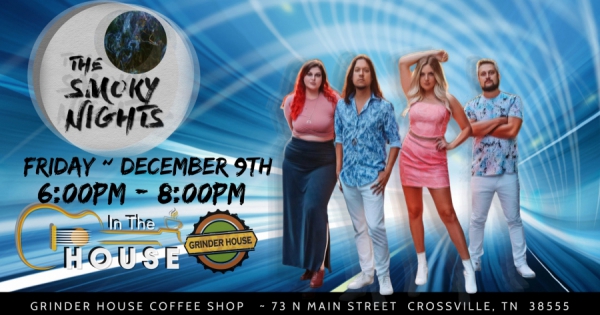 Published December 09, 2022
For the past 6 years, The Smoky Nights have filled the music venues of Middle Tennessee with uplifting melodies and harmonies. After moving to Cookeville TN, singer/songwriters Lily and Anthony Nguyen formed an acoustic band inspired by the guitar-driven sounds of Music City. They developed an original style, combining acoustic guitar, mandolin, and violin with melodic pop arrangements to play for a variety of audiences. The husband-wife duo, originally from Wisconsin, wrote the music and lyrics to the band’s studio albums: “Burning Bridges” (2019), and “Waking Up In Wonderland” (2021).
After the release of “Burning Bridges” in July 2019, The Smoky Nights set out to play music for wider audiences across the US. The band has since played in Texas, Wisconsin, Illinois, Kentucky, North Carolina, South Carolina, and even Mexico. In late 2019, they opened for Grammy-Award winning and RIAA platinum country band Diamond Rio, and they have also supported Cookeville-based artist Jake Hoot, winner of Season 17 of NBC’s The Voice. In 2022 they were the opening act for rock bands Jasmine Cain, and Resurrection - A Journey Tribute.
The Smoky Nights describe their sound as a blend of soul, pop, folk, and R&B music with influences spanning multiple generations and genres. Artists like Fleetwood Mac, Etta James, Santana, Outkast, Fitz & the Tantrums, Leon Bridges, and Beyonce have all uniquely inspired the band’s songwriting. Although their music is atypical for the region, The Smoky Nights have found a loyal following in Tennessee and continue to attract fans through their energetic live performances.