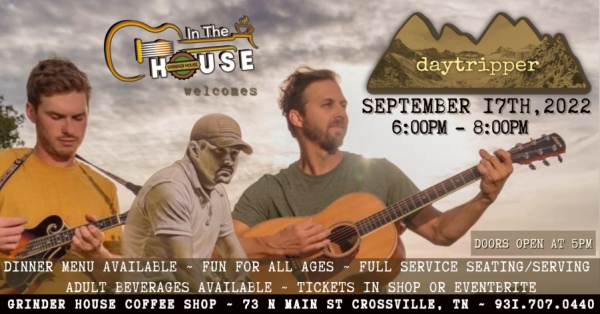 Published September 17, 2022
Justin and Cole have been performing and writing music together for near on 10 years. Honing in on their craft led them to the collaboration, 'Daytripper'. Focusing on acoustic instruments, they write in a style of alt-rock while incorporating instruments you'd normally hear in bluegrass music, such as the mandolin, banjo and upright bass. Both Justin and Cole have been lead vocalists in other groups, and use this to an advantage. They trade songs, using two unique voices to add an extra layer of originality to their music, while also belting out strong harmonies that they have crafted over many years of playing together at small parties and in the living rooms of each others houses. They bring that small house-show energy to any stage they perform on, leaving audiences stomping their feet and singing along like it's a simple campfire full of friends.
DAYTRIPPER ANNOUNCED SEPTEMBER 2021: "Super excited to have Jace England join Daytripper on percussion. This dude is legit and is now an official DayTripper."
Daytripper is a project by Justin Cecil, Cole Kemmer and Jace England to bring awesome new original music and a colorful acoustic spin on covers! Enjoy the show!
Due to reasons beyond our control, the archive of Daytripper is not available.