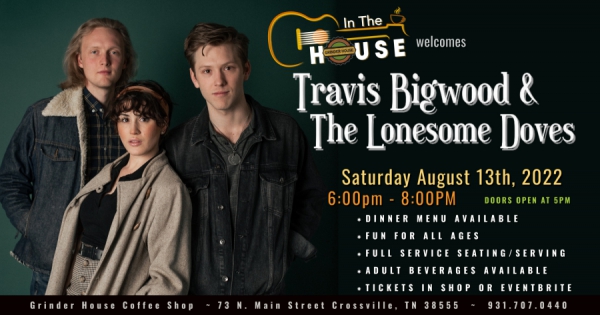 Published August 13, 2022
Travis Bigwood and The Lonesome Doves are an Americana Folk band from Knoxville, TN. Their songs focus on storytelling.
"I started writing songs because I wanted to tell a story. I wanted to share the anthology of my experiences growing up in East Tennessee and feel that connection that only music can bring. I try to capture the sound of the hardships and all the goodness that echoes through these mountains."
"It’s the sound of a young man attempting to make peace with his past and coming to terms with the changes of his present — the realization that while he might not be where he was or even where he wants, that good things happen. There’s both celebration and solace in such a moment of clarity, and that Bigwood spins it into sonic gold is evidence of an artistic soul wise beyond the years of its mortal shell." - Steve Wildsmith of The Daily Times (Maryville, TN)