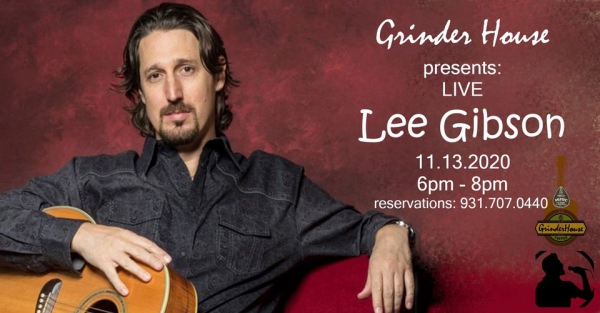 Southern roots run deep in Lee Gibson’s veins and you see that on stage when he performs. Raised in the small town of Winchester, Tennessee, gave Gibson the humbleness that comes across on stage and his love for country music. As a child Lee enjoyed sitting in front of the television or radio listening to some of the greatest artists of our time, such as Charlie Daniels, Merle Haggard and George Jones. Music started at a young age with Lee Gibson as he was part of the musicals and plays in his school, a member of the church choir, and he also had an acoustic show which he eventually added a full band to.
Gibson carries some of the songs from his country icons on stage as his songs tell the story of lost loves, hardships, falling in love and there are always the good drinking songs that have made history in country music. “Who You Are”, “Long Slow Night”, “My Country” and “Lincoln County Lightning” are just a few of the originals Lee Gibson performs at his shows. All of these songs telling stories that his audience can relate to.
Being compared to Dwight Yoakam and Ronnie Dunn Lee Gibson’s voice is powerful, clear and definitely country. With his influence, from these artists and so many more, Gibson pursued writing with some of the top Nashville songwriters. In 2001 he landed his first record deal and this put him on the stage with Randy Houser, Anthony Smith, Darryl Worley, T. Graham Brown, and even the late George Jones.
There is still uniqueness in his songwriting with the upcoming release of his sophomore album. You hear a collection of all of Lee Gibson’s influences on this album. There is love and heartbreak, happiness and despair, the jovial and serious and an album showing Lee Gibson’s talent and love of music.
As Lee Gibson steps on stage he does so with the experience he has gained over the years of working in the music business. His 6 foot 4 inch stature carries the deep richness in his voice as he sings to his audiences. His songs tell stories about who he is and some of the things he has experienced, as well as some classic country and rock and roll to get everyone up and out of their seats dancing. Gibson reaches out to his audiences and they love him as he makes time for them after a show.
This will be an exciting year for Lee Gibson. In November Gibson will be part of the An American Legacy Tour, starring Ronnie McDowell. A cruise is planned that will depart on the Carnival Fascination from Jacksonville, FL to the Bahamas, November 12 through November 15. Several other projects are in the works for Gibson and he is looking forward to this year and where his career is going.
As you walk into the venue you look on stage and Lee Gibson is performing. His voice carries through the sound system and you know you are about to see a great country singer on stage. His experience and talent shows through and the friendliness in his voice welcomes you to a seat. This is a Lee Gibson show. Quality, talent and pure country. 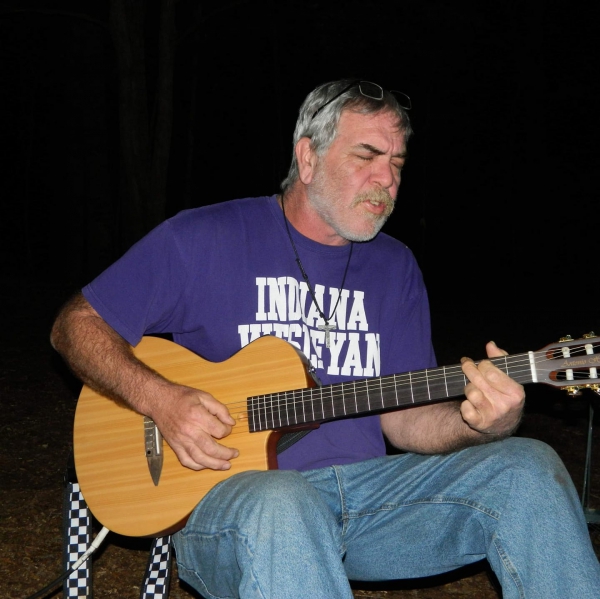 in Past Live Shows
November 10, 2020
Jessie has recently moved to the Tri-Cities Area in Tennessee. He has toured Alaska, Alabama, Florida, Indiana, Kentucky and Michigan. With a seasoned voice, baritone vocals and a raspy growl, Jessie covers many greats as well as his own originals. 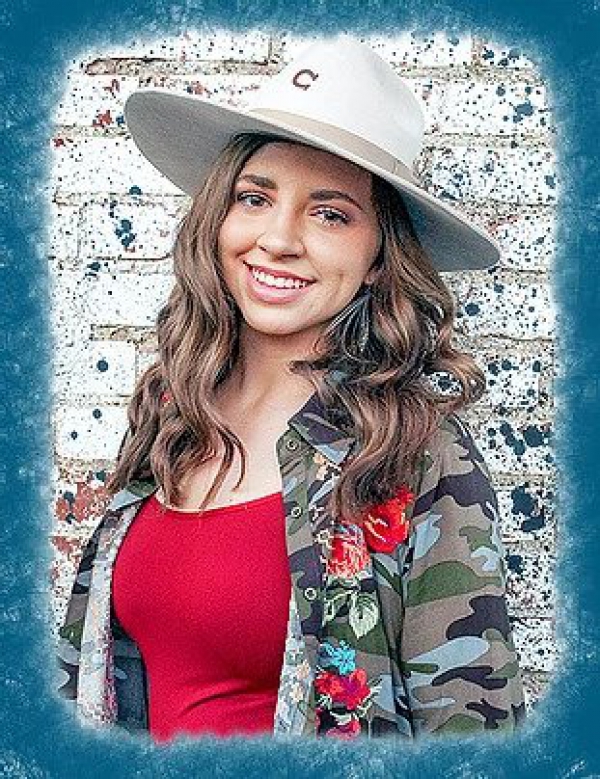 in Past Live Shows
November 10, 2020
Macy Tabor is a 17 year old singer songwriter who is a force to be reckoned with. Her stage presence and impressive yodels, set her in a niche of her own. Compared to a young Dolly Parton, Loretta Lynn, Brenda Lee, or Tanya Tucker, this seasoned young artist has been said to have all the sassiness and class of her idols Shania Twain and Miranda Lambert.   Macy has been performing on stage since the wee age of four. She says the bigger the crowd to perform in front of, the better. That would explain why performing the National Anthem in front of nearly 10,000 spectators in attendance for the Vanderbilt Commodores, came so naturally for her. She has performed on stages from Los Angeles, CA, Ft. Myers, FL, Sevierville, TN, Chattanooga, TN, to where she can now be found performing regularly at some of Nashville's hottest spots. She has also performed on several different stages during the CMA Music Festival over the past several years.  As a former co-host on an internet radio show in Nashville called The Kids Radio Club Show, Macy was also a former emcee and performer on The Nashville Spotlight. In 2016, as a nominee in several categories, Macy had the honor of performing at the Schermerhorn Symphony Center during the Josie Music Awards for Independent Artist in Nashville, TN. She was the 2017 Young Adult Rising Star Award Winner at the JMAs. In 2018, Macy was nominated for Young Adult Vocalist and Young Adult Artist of The Year at The Josie Music Awards. With receiving three nominations in 2019, Macy brought home the JMA Young Adult Artist of The Year Award for Independent Artist. As winner of the first Lynchburg Winery Shine On Series Singer/Songwriter Competiton in 2018, Macy's songwriting has been compared to that of a young Taylor Swift's style of writing. Winning this competition gave her the opportunity to be the first artist to ever play on the main stage, of the first ever Lynchburg Music Festival in 2019.  In 2018, Macy held the title of Miss Lynchburg Outstanding Teen. She serves as a Lead Junior Spokesmodel for the Confidently Ready by Josie Passantino cosmetic, skin care, and hair care line. In her spare time, Macy enjoys volunteering in her community, and for any cause that is in support of our military and our veterans.   Macy serves as an advocate for Notes for Notes, which is a non-profit organization dedicated to providing youth with completely free access to music instruments, instruction, and recording studio environments. Her involvement with "Notes For Notes" lead her to being able to perform all four days at the 2019 Bonnaroo Music Festival, in her hometown of Manchester, TN, on the Musicians On Call Stage. She has also had the honor of being part of a collaboration with country music siinger/songwriter Kane Brown and US Bank at the Notes For Notes studio in Nashville. This was on a continuation series with the CMA Foundation to support music education opportunities in schools and nonprofit organizations where there is a great need.  Not only is she a sought after singer songwriter, she is also an accredited actress and model. 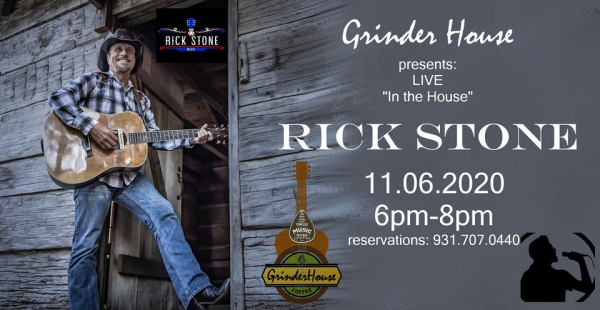 in Past Live Shows
November 06, 2020
Rick Stone has been entertaining serious music fans for over 10 years now. Rick Stone and his Band of Brothers are road proven and are always up for a good time. Rick has performed Country, Southern Rock, Blue-Grass and Americana at many prestigious venues and events across the Southeast such as Mad Life Studios and The Belle Meade Plantation. He has also performed at the Cobb and Paulding Rodeos and the Georgia State Fair. As a military veteran Rick is an active supporter of local charities and events to support veterans, children and the underprivileged, dedicating time to organizations such as St. Jude's Children's Hospital and the American Legions. Rick clears his schedule for at least 6 charity events per year.
Rick’s signature personality shines in interviews with Atl. & Co., Full Throttle Magazine, Rising Star Magazine, and many local radio shows and newspapers. That personality translates effortlessly to the stage. Rick likes to engage with the audiences at his shows, coming off stage and performing amongst the crowd he demonstrates his desire to be close to his fans. He makes himself available before, after and even during shows for a quick chat and a friendly handshake. Rick has had steady success in the industry, beginning in 2008 with the debut of his single ‘Me and You’, a deeply personal song that gave him his first radio airplay. He followed the success of this track with a string of impressive single releases including ‘I’m Your Man’, ‘Never Started Drinking’ and ‘This Ole Road’. Recent releases show no sign of him slowing down either. The accompanying music video for his 2019 single ‘Wonderin’ What I’m Doin’ Wrong’ quickly hit 100k views on YouTube and his newest single ‘Quicksilver’ is positioned to do equally as well. Things keep moving quick for Rick and he couldn’t be happier to have the support of the best group of fans and family a man could ask for. Don’t miss a chance to catch him live, you sure won’t be disappointed.
Read more...
Page 2 of 48