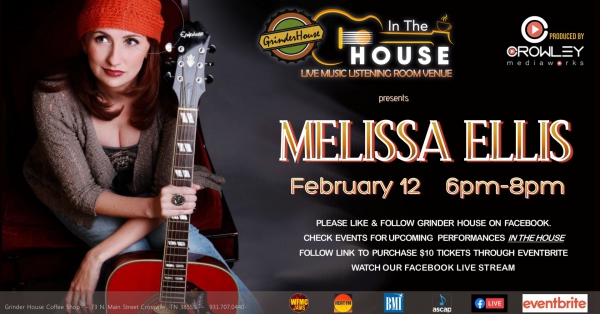 Published February 12, 2021
Melissa Ellis returns to Grinder House Coffee on February 12, 2021! Possessing a vocal power that packs a serious punch, add in her opulent tone and texture reminiscent of jazz’s golden age, her distinctive growl of the blues, and soulful delivery, Melissa has concocted an unforgettable signature blend of blues, jazz, and blue-eyed soul. Her spicy southern drawl is only the cherry on top.
Melissa Ellis is an award winning singer-songwriter and a 2020 quarterfinalist of the International Blues Challenge in Memphis, TN where she shared the stage with over 100 rising solo/duo blues acts from all over the world.
Beginning her professional career as a singer/actress/dancer in theater at the age of 16, she performed in regional tours before moving on to study classical and jazz music at Tennessee Technological University as a vocalist while pursuing a singing career in Nashville.
In 2009, Melissa released her debut album Melissa Benjamin, lending her seasoned talent to the world of bluegrass & gospel. Her original single, “Crossville,” was adopted by her hometown as the official city song. While touring, she found new inspiration and started writing more original songs. With new songs came a new sound that evolved into a more soulful genre.
Melissa’s sophomore album, Just Me, was released in 2011 and as a multi-instrumentalist, the album showcased her musicianship on guitar and piano, as well as more of her original material.
Melissa’s latest musical journey brings out the raw emotional sounds of blues & her training in jazz. Her repertoire includes her original songs mixed with re-imaginings of familiar classics that are presented in fresh new ways. Melissa has landed opportunities that have placed her on world renowned stages, on radio, on television, and at high profile festivals, including Nashville’s acclaimed CMAfest where her soulful style was showcased among the sea of rising country twang.
Last modified on Friday, 12 February 2021 21:12
Tweet
Login to post comments
More in this category: Previous In the House at the GrinderHouse - 2/19/2021 - Travis Bigwood Next Midnight Madness Show - 2/02/2021 - Jonathan McQuay
back to top