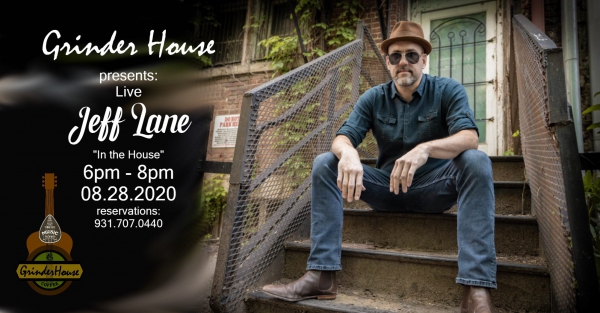 Singer, songwriter, and guitarist Jeffrey Allan Lane, mostly known simply as Jeff Lane grew up in Kingsport, Tennessee, where he began playing guitar fervently at the age of fourteen; fascinated by the invention of the “historic” MTV and the great rock guitar players of that era. From an even younger age, his musical roots were watered by his mother’s record collection that was packed full of greats like Bob Seger & the Silver Bullet Band, The Eagles, Elton John, Jim Croce, Elvis, The Beatles, and the Commodores. Sneaking over to a neighbor’s house he learned about hot bands AC/DC, Pat Benetar, and REO Speedwagon. After forming a few high school rock bands, life took Jeff out of the public pursuit of his dream. For the next 20 years, he kept his songwriting pursuit private all while picking out the biggest influences in each generation to add to his sound. With a major economical turn of events in 2010, and the loss of Jeff’s business and his farm, an unexpected door opened that started his long-awaited musical journey. That winter collaboration began with Matthew Oakes which would quickly lead to a series of phone calls from guitarist/producer Quentin Horton wanting to record the project known as Hundred Acres. While in the studio, Hundred Acres was officially joined by Horton on lead and slide guitars, as well as guest tracks from fiddle player Kevin Jackson and former Allison Krause & Union Station guitarist Tim Stafford who was touring with Blue Highway as an award-winning guitarist. The result was Jeff’s first record “Where the Buffalo Roam” which he debuted on his 40th birthday in 2011 at his first official gig. Although nervous and clumsy on stage at first, the music brought an energy that grew quickly resulting in a second record exactly one year later called “Feels Good”. At this point, Horton who formerly experienced development in Nashville suggested that Jeff pursue his next step by experiencing songwriters in other places to find more influence and experience, replicating the journey he had taken years before. For the next few years, Lane followed the advice and began playing hundreds of open mics and songwriter rounds within a two hour (100 miles) driving radius so that he could return the same night for work the next day. His soulful and story-telling style of songwriting, along with tasteful guitar work quickly acquired notoriety as someone wanted in “good” rounds, and opened doors further away and into Nashville where he regularly appears at venues such as the world-famous Commodore. With the growth achieved by constant appearances as a songwriter, Lane has become a powerhouse that commands most rooms, bringing audiences to full attention with the sound of his soulful voice of heavily bluesy-style guitar licks on a beaten 1953 Gibson LG-1. Jeff Lane has made many appearances on indie radio stations including the famous “Blue Plate Special” WDVX in Knoxville, TN, and “Appalshop” on WMMT in Whitesburg, KY. Jeff, in addition, has performed with many A-list performers and writers over the years including Tim Stafford, Chris Knight, Kim Williams, Sean Gasaway, Benjy Gaither, Steve Williams, Aaron Barker, Keith Anderson, Lance Miller, Doug Johnson, Bobby Tomberlin, Mark Steven Jones, Randy Finchum, Lara Landon, Emily Minor, Annie Robinette, Bobby Starnes, Justin Mychals, Karen Reynolds, Mason Reed, Robby Hopkins, Mo Pitney, Bill LaBounty, Carrie Tillis, Willy “Big Eyes” Smith, Folk Soul Revival, Holly Williams, Hilary Williams, Bill DiLuigi, Lanndon Lingerfelt, Johnathan Dean, Marc-Alan Barnette, PJ Steelman, Scott Southworth, Heino Meoller, Morgan Alexander, Judy Paster and many more.