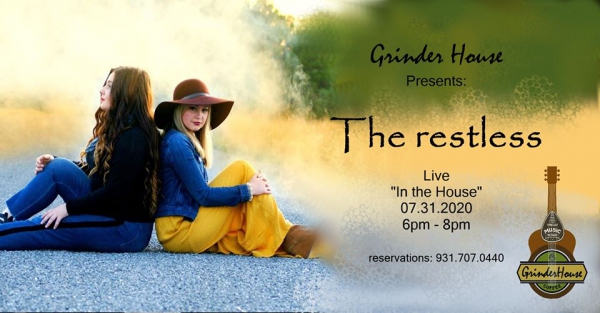 Sisters Rachal & Emily collaborated as the restless in 2016.

With over 400 live performance credits, the restless continue to find new ways to engage with listeners. Growing up near Nashville, both sisters began performing at festivals and songwriting rounds at very young ages.

The duo’s original song “Phone Calls to Heaven” placed number one in the Kentucky songwriting competition during the girls’ high school career. That same year, the duo performed at a national education event at The Galt House in Louisville, which honored and encouraged strengthening education.

​The restless are the founders of “Songs for Change” an annual benefit concert focused on giving back to a charitable or nonprofit organization of the group’s choosing.

The restless define their sound as Pop with singer-songwriter storytelling, hints of early 2000’s style, layered with harmony.

In 2018, the restless began working on their first debut Pop EP titled “Change.”

The EP captures the many different types of change, and tells the story of an individual eventually becoming okay with who they are.

“CHANGE” EP is the restless’ most recent release and was released November 29, 2019.