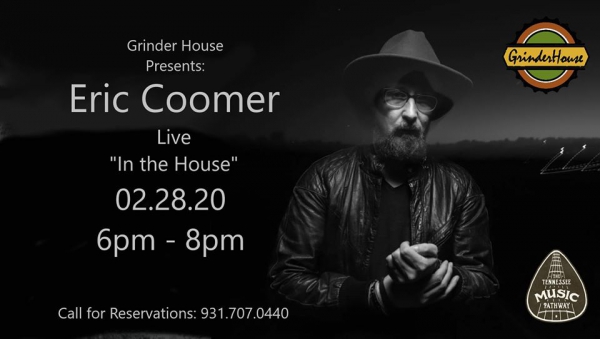 "In the House" at The Grinder House - Eric Coomer

Published February 28, 2020
Nashville based multi-instrumentalist and singer/songwriter Eric Coomer has built a name for himself as a talented musician, singer, and songwriter as both a solo artist and as lead singer for the band Knapsackheroes.

Eric sings from the perspective of a fellow traveler who understands well the doubts and frustrations as well as the joy and laughter this life brings. He's never been afraid to tell the truth in all its ugliness and beauty in his songs.

Growing up in Kentucky, Eric was the child of a father who was a pastor and a mother who
is a lauded music teacher. Eric has been performing since he was a teen and writing since he was just twelve.

Some of Eric's biggest influences include R.E.M., Tom Petty, Over the Rhine, Sixpence None the Richer, Simon and Garfunkel, U2, and Ryan Adams.

Never satisfied sounding like anyone else, Eric strives to be an original and veer away from the ordinary. This is reflected in the wide array of artists with whom he has shared stages including The Band Perry, Tiffany, Colony House, Jukebox the Ghost, Futureman (of Bela Fleck & The Flecktones), and Cavo.

Eric recently released a winter EP and a new single. He will more music later this year.