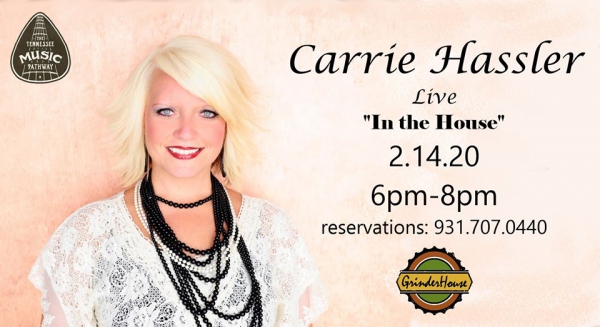 "In the House" at The Grinder House - Carrie Hassler

Carrie Hassler's amazing voice, highly entertaining performances, and numerous #1 albums and singles have garnered great attention over the last several years. She has received the Country Song of the Year Award by Strictly Country Magazine and appeared on the cover of Bluegrass Music Profiles Magazine, among numerous other recognition. She also garnered the #1 country single, "Country Strong" on European country radio and several #1 albums and singles on bluegrass music charts here in the U.S.

Carrie jumped on the scene late in 2006 with the release of "Carrie Hassler and Hard Rain" album on Rural Rhythm Records. The album was produced by Jim VanCleve of the band Mountain Heart and received immediate success debuting at #11 on Billboard Top Bluegrass Top Album Chart (retail sales) and spending nine months in 2007 on the Bluegrass Unlimited National Bluegrass Survey Top 15 Album Chart (airplay).

Just over a month after the initial album release, the single “Seven Miles From Wichita” hit the #1 spot on Sirius Radio’s Bluegrass Top 40 and went on to spend 10 months on the Bluegrass Unlimited Top 30 Single Chart and was also a crossover in country radio as well. While that single was still charting, another single, “Going on the Next Train,” hit the same chart and appeared until January 2008. Yet another track, the gospel bluegrass song “Least That I Can Do” spent a year on Bluegrass Now Magazine’s Gospel Truths Chart.

In 2008, Rural Rhythm Records released her second album, "CHHR2" again produced by Van Cleve. The album made its debut at #5 on Billboard’s Top 50 Bluegrass Chart (retail sales)and climbed the Bluegrass Unlimited Top 15 Album Chart along with many other charts. The first single, “I Can Go Back Anytime” hit #1 on the May 2009 Bluegrass Unlimited Top 30 with the second single, Faith & Hope also hitting the #1 spot on Power Source Magazine’s Top 10 Bluegrass Songs.

She has also been honored by her hometown of Pikeville, TN where the Mayor presented her with the Key to the City and proclaimed “Carrie Hassler Day."

Carrie has been influenced by a wide range of talents including Sheri Easter, a gospel singer who tinged her music with some bluegrass sounds along with the gospel message; Etta James, Patsy Cline, Dale Ann Bradley and Alison Krauss. "To this day, I remember the people I looked up to and I hope to make the same kind of mark in lives as these women did in mine," said Carrie.