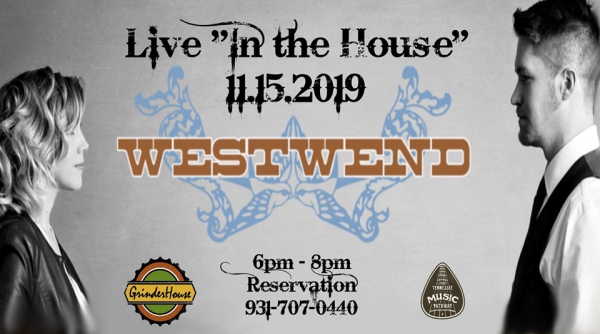 WestWend is an Americana/country duo comprised of Jonathan Maness (guitar, vocals) and Wendy Crowe (vocals). Established in 2011 in Knoxville, Tennessee, they perform and record new traditional country music. With Jonathan’s roots in bluegrass and Wendy’s roots stemming from the Delta blues, classic country, and Motown, they have come together to create a sound all their own.

WestWend’s latest CD, “Linger For A While”, takes bluegrass standards and makes them new again, while their originals capture their audience with a traditional flavor. Wendy’s voice has been best compared to Alison Krauss, while Jonathan’s rich baritone and agile flatpicking are well known to audiences on both sides of the Atlantic. WestWend has performed at some of the biggest festivals in the United States and Europe including: the Bristol Rhythm and Roots Reunion, the National Cornbread Festival, the St. Augustine Seafood festival, the Pensacola Great Gulf Festival and more. They also performed a 14 day tour in 5 european countries, including the Spring Bluegrass Festival in Switzerland. They have also opened for Rhonda Vincent, Guy Clark, and Tyler Hilton.

The road goes on forever for WestWend and their second album is set to be released in late 2018. Whichever way the wind blows, you can be sure to see WestWend in a town near you.