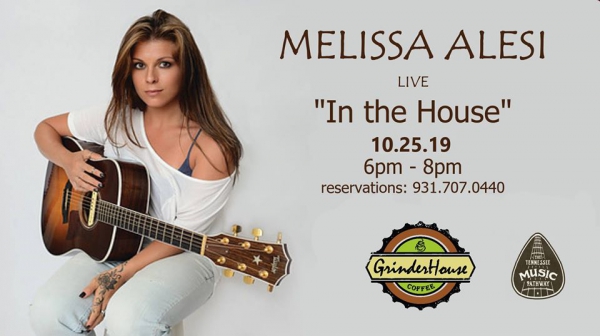 Melissa Alesi is a contemporary singer-songwriter from Delaware with a unique sound that fuses folk, alternative, and a bit of country, ornamented with eclectic elements of world music. Melissa began singing at age 12 when she auditioned for the Delaware All-State Choir. She began studying classical voice when she fell in love with performing. From soft crooning to powerful rock, she keeps the audience on their toes with her versatile vocal ability.

"I really fell in love with performing because it is an outlet like no other. I'm usually pretty quiet, but I like the feeling of being on stage because you can be anyone you want to be and really immerse yourself in the song. When I am performing- truly feeling a song- I am not thinking about anything else but that moment and I love that feeling!"

At a young age, Melissa was influenced by artists such as Billy Joel, Michael Jackson, Electric Light Orchestra, Fleetwood Mac, and Neil Young. I remember sitting in the car with my dad and he put on an ELO cassette and we listened to 'Mr. Blue Sky.' I was hooked!"
Melissa began songwriting in 2007, and released her first full-length album, "ALESI,” in December 2008. Around the same time, she started developing a love for songwriting, she began performing as rhythm guitarist and vocalist in the trio, High Maintenance. In the four years with High Maintenance, Melissa built up her own repertoire and began playing as a solo artist. In 2012, she recorded her second album, "House of Stones," with Jimm Mosher at Hit Music Inc., in North Carolina.

During the next few years of developing her craft as a songwriter and guitarist, Melissa met Johnny Neel of the Allman Bros. Band. In May 2015, Melissa headed down to Nashville to record her third studio album, Lie Again, with Johnny. Melissa is currently promoting her album and playing shows on the East Coast.

Bonnaroo lineup is out! Get your tickets now at bonnaroo.com. Payment plans are available starting as low as $35!