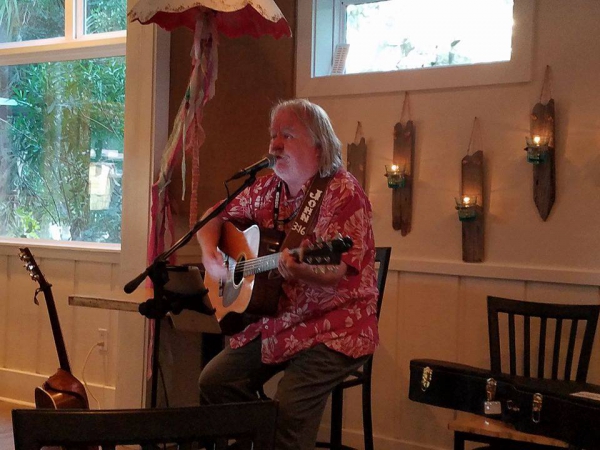 Gary Cavanaugh
in Past Live Shows

Published September 17, 2019
There's a magic about Gary's Songs that is undefinable but its there "Don Wayne number one writer of Saginaw Michigan and Country Pumpkin" Those words define the Music Of Gary Cavanaugh .Originally from Colorado where he played professionally since he was 15. Gary was well known in Colorado, Wyoming Arizona and Montana as a performer and Songsmith. He and his partner of many years Ron Berg had a Residency gig at the Gilded Garter Saloon in Central City Colorado for most of the eighties. Gary also lived in London, England for 2 years in the 70's playing his original songs throughout Europe and signing a publishing deal with the Mervin Conn organization for a short time. At the age of 45 Gary Moved To Nashville Tennessee and was proud to be a staff writer ar Ash street Music. Gary also passed the Bluebird cafe audition in 2004 and plays the Bluebird from time to time. A accomplished songwriter Gary Co-writes regularly with number one writers Stan Webb , Gerald Smith, Jan Buckingham, Don Wayne, Jimmy Payne, Bill Whyte, Wood Newton and many others. He also writes with up and coming writers Scott Barrier, Camden West, Megan Barker, Meg Williams and many more. Gary can be seen performing regularly at all the popular Nashville songwriter venues and has been a featured writer at the Frank Brown Songwriters Festival, The smoky Mountain Songwriters Festival and plays house concerts and private events. Gary was thrilled to play on the Grand Old Opry Spotlight Radio Show with the Legendary Charlie Louvin, Don Wayne and The great CJ Watson. The show reached over six million listeners. Please take the time to listen to some of Gary's music included on the website and please drop him a line, join his fan club or just say hello.
http://www.garycavanaugh.com/
The Midnight Madness Show can be heard live on WFMC Jams every Tuesday from 7-9pm central
Last modified on Wednesday, 18 September 2019 20:31
Tweet