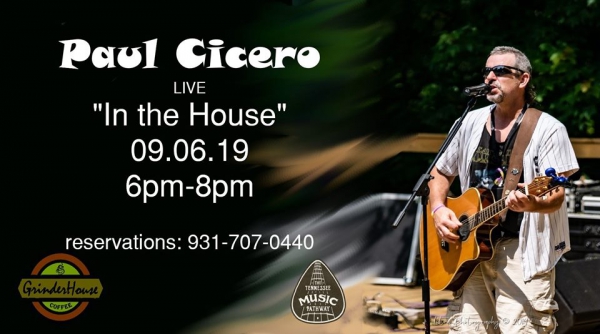 Published September 06, 2019
Fast becoming one of Middle Tennessee's most sought-after
co-writers and entertainers, Paul J Cicero has been embraced by the songwriting community. Because his music blends the genres, embracing his hard rocking Illinois roots, his faith, and the country music of middle TN, Paul is able to work with songwriters from across the music spectrum. His passionate and honest lyrics resonate with the audience while his "goofy creative" sense of humor keeps them in their seats. An active member of the International Singer-Songwriters Association, Paul has performed at such Nashville icons as Bluebird Café, Bobby's Idle Hour, and Commodore Grill and has performed for the past three years at the Smokey Mountain Songwriters Festival in Gatlinburg TN. He has been featured on multiple air & internet radio stations across the globe.
Paul is a regular host at the legendary Jim Oliver's Smokehouse in Monteagle,TN and is the creator and host of the "Between the Lines Songwriters Showcase" showcase at Between the Burgers Bistro in Manchester, TN. Paul's song "Open Mic" was played on Nashville's "Legend" WSM radio.
Last modified on Monday, 16 September 2019 18:59
Tweet
Login to post comments
More in this category: Previous In the House at the GrinderHouse - 8/30/2019 - Bill Whyte Next In the House at the GrinderHouse - 9/13/2019 - Jerry Boonstra
back to top